GAPS on AIP (aka Fast-track Your Gut Healing)

You are here: Home / AIP / GAPS on AIP (aka Fast-track Your Gut Healing)

GAPS on AIP (aka Fast-track Your Gut Healing)

“Soup, when properly prepared from nutrient-dense meat stock, provides an exceptionally easy-to-digest and nourishing meal that begins to heal the gut wall. The proteins in meat stock are partially broken down, giving your body a chance to rest while reaping the benefits of the stock’s healing power.“ — The Heal Your Gut Cookbook

Ladies, doing a modified GAPS Intro Diet for a month or so while on AIP a year and a half ago was one of the best dietary moves we made for my ability to fully reintroduce eggs and green beans/peas, moderate amounts of nightshades, etc. and just generally feel AWESOME, mentally and physically.

This was after I had already been mostly on the AIP Elimination Phase for five to six years!

If you, like me, react negatively to bone broth which is typically cooked for several hours longer than meat stock (thereby increasing the histamine content, glutamic acid and free glutamates), but you want to enjoy its copious amounts of gelatin to protect and heal the mucosal lining of your gut and facilitate digestion and absorption of nutrients, then I highly recommend you try GAPS Stage One meat stock!

This meat stock has a different profile of amino acids than bone broth, so even if you do tolerate bone broth fairly well you may want to mix it up a bit!

I call it my LIQUID GOLD or you can just call it “giving your body some lovin’!”

Why We Did It

Our family decided to fully dive into GAPS Stage 1 back in December of 2018 in order to try something I intuitively had always felt had the best chance of truly healing my gut and that of my middle child who has struggled with numerous food sensitivities and emotional regulation issues since he was a toddler.

I had already been on AIP for about five to six years with little success re-introducing anything non-AIP, and I knew there was something different about the GAPS diet in that it slowly eases you into sugars and starches that are allowed on the AIP Elimination Phase from the get-go.

I had hesitated for so many years because I knew it would be no easy feat to eliminate fruit and other sugars (except for sparingly used raw honey) for several weeks.

Instead of their normal paleo meals of hamburgers, ketchup, paleo mayo, eggs, meatballs, stir-fries, salads, starchy root veggie fries, fruits and occasional paleo desserts, we would primarily be having slow-cooked meat soups and veggies cooked in those soups or steamed.

Granted, we would have some Stage 1 treats too, but it would be a big adjustment for awhile!

Feeling pretty desperate with my middle child’s behavioral issues that seemed to highly correlate with what he ate, my husband and I decided we needed to give GAPS Stage 1 our best shot. We jumped right in, The Heal Your Gut Cookbook: Nutrient-Dense Recipes for Intestinal Health Using the GAPS Diet, slow cooker, instant pot, and/or stock pot in hand!

How We Made it Work for Our Family

To prevent major pushback from the kids, we gave cash incentives. For every cup of broth drunk, they earned a certain number of cents, recorded on a chart we typed up.

A separate checklist for each kid (and Mom) recorded the following: 1) Before every meal, they got a shot of probiotic juice (usually WildBrine sauerkraut from Costco, homemade sauerkraut juice, or Bubbies pickle juice); 2) Between or after meals, they got a set number of GAPS stage 1 treats (“coconut creams” or “fat bombs” as I like to call them, basically coconut oil or Nutiva Red Palm Oil mixed with raw honey and frozen into silicone molds).

Despite initial rebellion, they were sold on the idea.

Are my kids the only ones super motivated by cash incentives?

How did it go initially? I recall some mildly uncomfortable detox/die-off symptoms, adjusting to a very low sugar and highly healing diet for the first 2 to 3 days.

The hardest part for me was some constipation, which I remedied with extra magnesium in the form of epsom salt

baths with a drop or two of lavender essential oil

sprayed on my abdomen, and two supplemental magnesium glycinate (my go-to magnesium supplement for 8+ years after I learned it helps tremendously with anxiety/depression!).

We learned online through http://www.gapsdiet.com/commonly-asked-questions.html and the The Heal Your Gut Cookbook: Nutrient-Dense Recipes for Intestinal Health Using the GAPS Diet that juicing can also help with constipation on Stage 1, so after a week or two of strict GAPS Stage 1, we decided we would shop for a real juicer, not just a high-powered blender like the Vitamix we used so much in my vegan past for smoothies.

We got an Omega Juicer that I bought gently used from a naturopath on Craigslist, but you can find one new on Amazon for under $300. It is easy to use and clean, and it helped with the constipation issue right away. We love ours, and our whole family, from Dad on down to the 2-year old, still love fresh homemade veggie/apple juice, to this day!

Another great juicer option is the Breville Fountain Plus, another highly-rated centrifugal juicer at about half the price.

Juicing has been an awesome investment in our family’s health.

In fact, my 2-year old demands to do all the actual juicing himself as soon as he hears it going, as you can see on this youtube video. 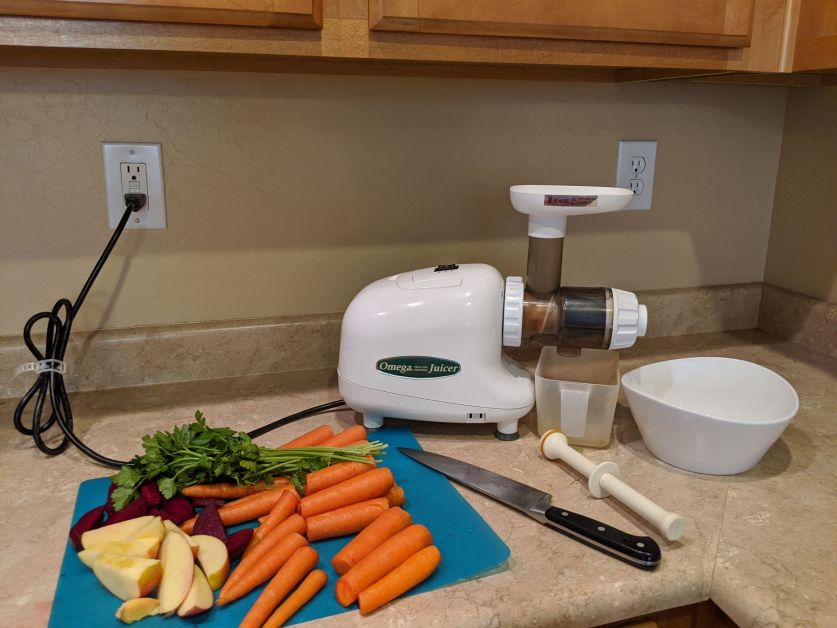 My usual juicing recipe: carrots, beets (red or yellow), one apple, some fresh spinach, parsley or cilantro, and a chunk of ginger! Aim to get organic if possible!

Aren’t the colors beautiful?! Your body will love this..but ease into this and the meat stock to give your body time to adjust!

Week Two and Beyond

After about a week on GAPS Stage 1, we noticed my middle child’s behavior and digestion improved a great deal. Realizing we were pretty starved for anything beyond meat/veggie soups after a couple weeks, we began gently frying up huge batches of scrambled eggs, white and all, cooked in avocado oil

or Nutiva Red Palm Oil (which, by the way, I love the flavor of and would use instead of coconut oil in the “fat bombs” due to my coconut sensitivity).

While I couldn’t handle even a couple eggs too well without negative symptoms before we started GAPS while doing the AIP Elimination phase diet, I had no problem having six to seven eggs or more this way all of a sudden, to my sheer delight! I missed eggs so much on AIP, and this was a huge victory for me! To this day, I can eat a lot of eggs with no problem at all.

We also would buy a lot of frozen vegetables like the Normandy Organic Vegetable bag of broccoli, cauliflower and carrots you can get at Costco, steam them, and use those for veggies.

I also actually enjoyed the slow-cooked meat stocks a great deal — they were comforting, gave me clear focus and bright mental outlook, and didn’t flare me up in the least bit, in contrast to the highly-touted bone broth.

It had always been a big disappointment for me when AIP bloggers or authors wrote how key bone broth was to their healing because it actually caused horribly serious flares for me (could barely walk), most likely due to high histamines which build up the longer the bones simmer in the broth. Stage 1 meat stocks, on the other hand, did NOT flare me up in the least bit and made me feel GREAT!!!

After about a month or so on this modified GAPS Intro diet, we gradually returned to a more paleo-like diet. We didn’t continue much onto later stages of the GAPS Intro diet because my son and I still didn’t react well to homemade cultured dairy like yogurt (recipes in the The Heal Your Gut Cookbook) and other reintroductions in later stages.

Nevertheless, I am so grateful that we did GAPS Stage 1 when we did as it has allowed me to expand my diet a great deal and find what I now call my “power foods” for anytime I’m starting to feel a flare coming on for veering too far off my AIP/paleo diet, stress, etc.

To this day, a year and a half later, I still make a Stage 1 meat stock (usually an organic chicken with ginger, celery, carrots, sea salt and some peppercorns) almost every 1-2 weeks (less in the summer), and we juice once or twice a week regularly as well. Everyone vies for the juice because it goes fast!

While I now feel one could do GAPS Stage 1 without other family members participating, I do feel that is is ideal if you can get at least one other person in your family to do it with you, both for moral and hands-on support. My husband’s support was hugely helpful in getting our family to commit to GAPS and stick to it for a set time, as well as implementing it according to The Heal Your Gut Cookbook: Nutrient-Dense Recipes for Intestinal Health Using the GAPS Diet.

I highly recommend this book if you want to better understand and implement the GAPS strategies (Stages 1-4) into an AIP framework — there is no need to include the non-AIP cultured dairy, soaked and dehydrated nuts , etc. in later stages if it doesn’t agree with your body, but the Stage 1 approach has a lot of merit in giving your gut a designated period of time (a couple weeks to a month usually) to heal your gut without the sugars and starches of AIP.

The Meat Stock Recipe in a Nutshell:

To make this liquid gold stock to fast-track your healing:

1. Place a whole chicken or 2-3 lbs of organic/pastured chicken legs/quarters or other bone-in meat in your instant pot/slow-cooker.

2. Add 3-4 organic carrots, 3-4 organic celery ribs and one medium onion (all coarsely chopped), an inch of peeled fresh-cut ginger, 2-4 garlic cloves, some fresh rosemary or thyme if you have it, a few tsp of sea salt, and a small handful of black peppercorns (if you’ve successfully reintroduced pepper, as it’s not AIP Elimination phase compliant) if you like.

3. Fill with filtered water to the fill line and get that baby cookin’.

4. Slow cook in the Instant Pot or your slow cooker

on the Medium/High setting for anywhere from 6-8 hours (don’t want to do much more than that to avoid high histamines in bone broth!). Alternatively, place all the ingredients in an oven-safe soup vessel like a dutch oven

5.When it’s done, let it cool for 1-2 hours or when safe to handle. Use 1-2 serving utensils to transfer the meat to a big glass bowl and later separate the meat from the skin and bones to eat later in a stir-fry/soup/by itself.

6.Then use a stainless steel funnel

and strainer to pour the stock into a big mason jar or gallon glass container with a stainless steel soup ladle.

You can let this container with stock cool a bit and then serve yourself some fresh stock or refrigerate the big jar to heat up a cup later in your microwave or on the stove!

It should last at least 5-6 days in your fridge if you’re careful to keep fingers out of the stock while prepping it for the fridge.

Your gut is going to LOVE this and I hope you will too!!! 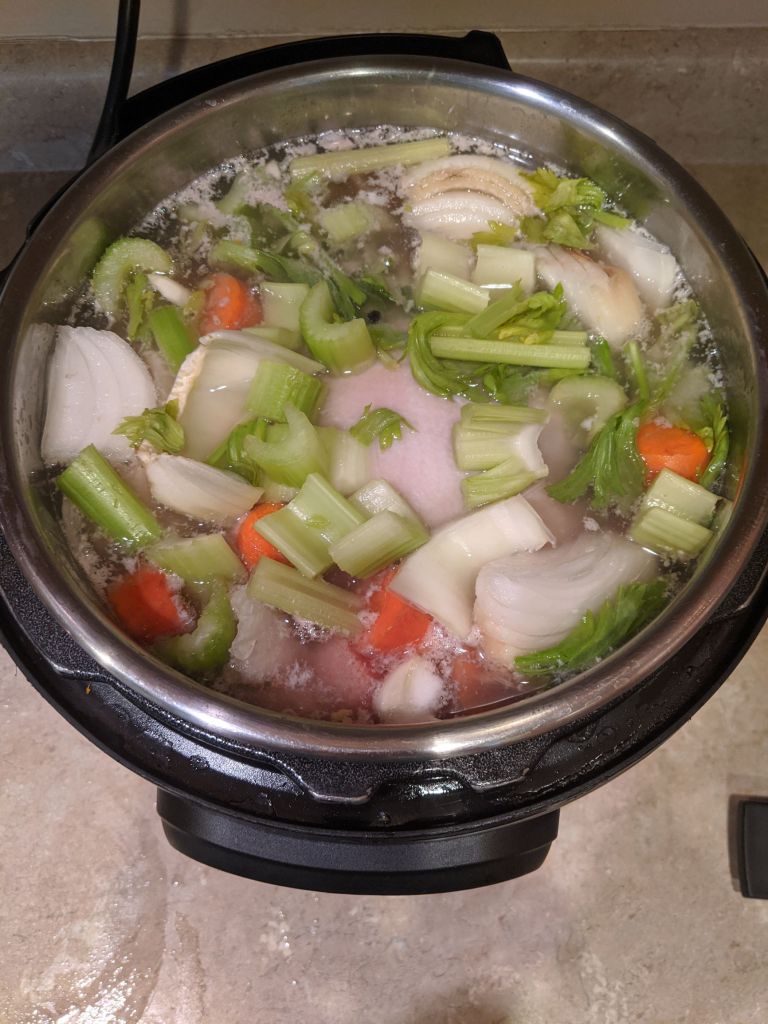 My typical meat stock recipe ready to cook for 8-9 hours in my Instant Pot. 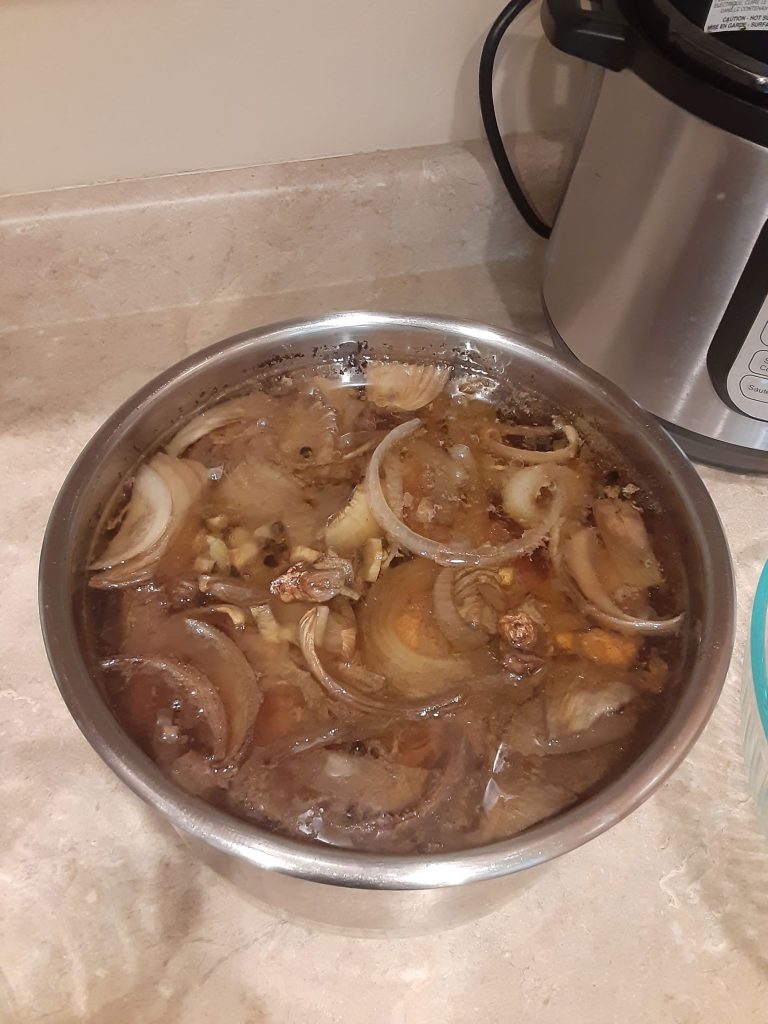 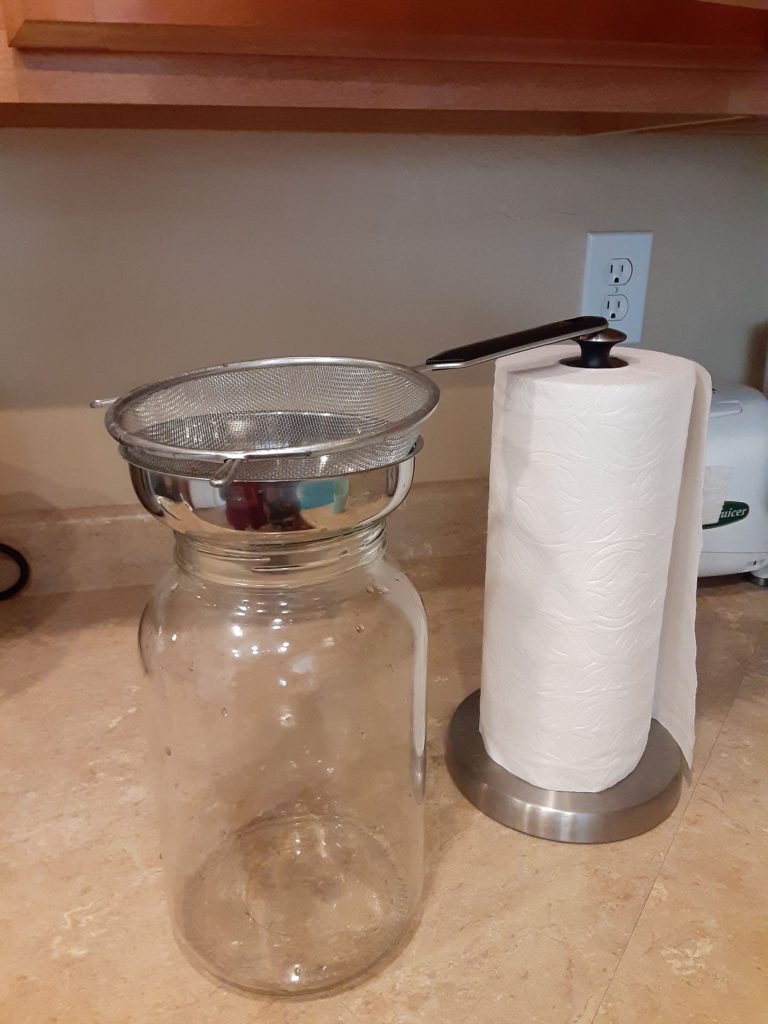 Ready to strain and refrigerate

Let me know if you tried this meat stock recipe or homemade veggie juicing and comment what worked, what didn’t, and with any questions you may have!

You may be interested in these posts from the same category.